The action is based on the US 117th Rgt moving through the bocage after crossing the Vire River on 7 July, meeting ad hoc delaying elements of Kampfgruppe Heinz set up around a farm complex on a hill. 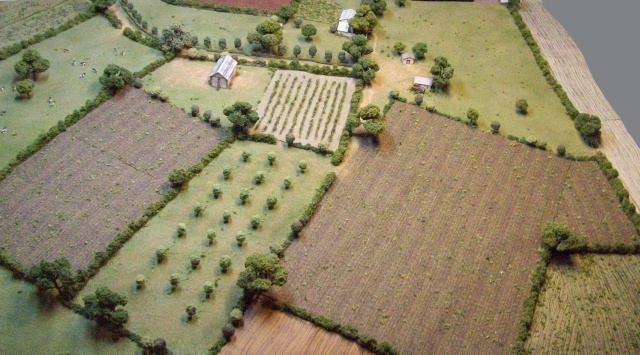 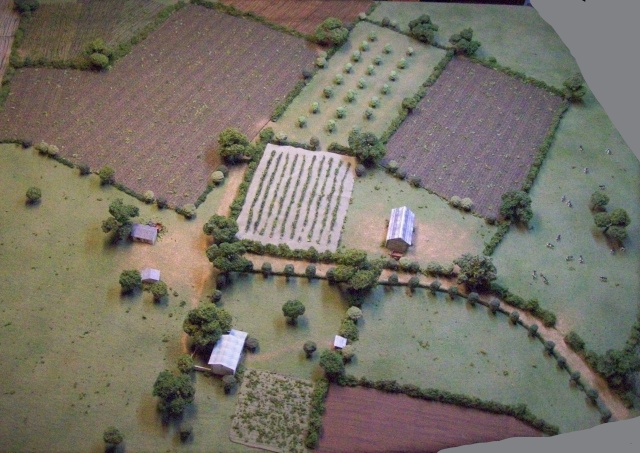 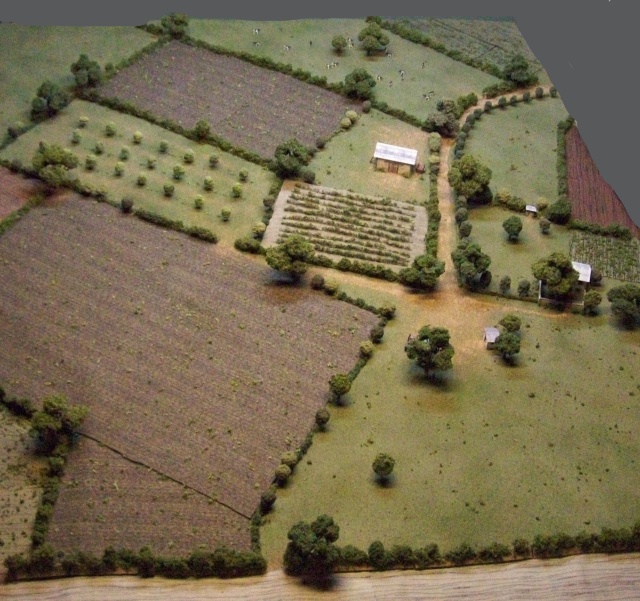 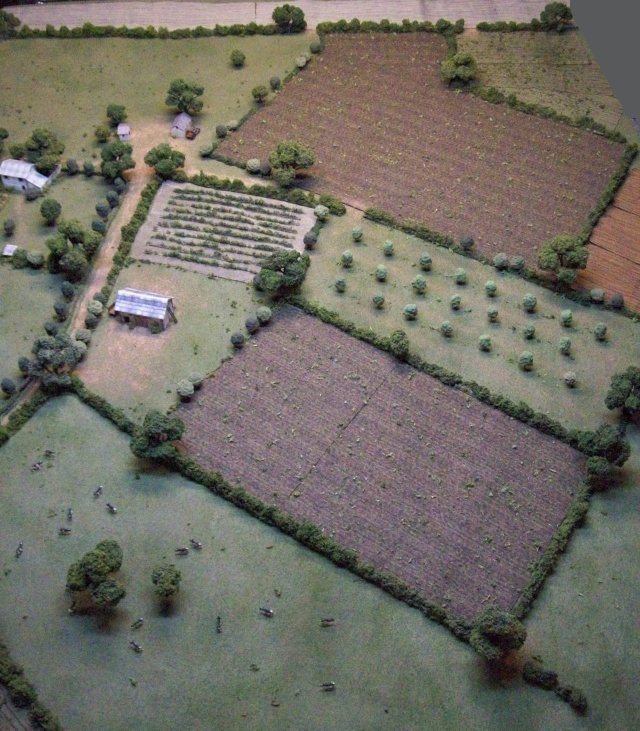 US Forces:  The regular platoon has a 30-cal MMG and 60mm mortar in support to provide firepower against the expected hedgerow defenses, as well as three engineer teams (attached to help the tanks get through the hedgerows…but the tanks haven’t made it across the river yet). 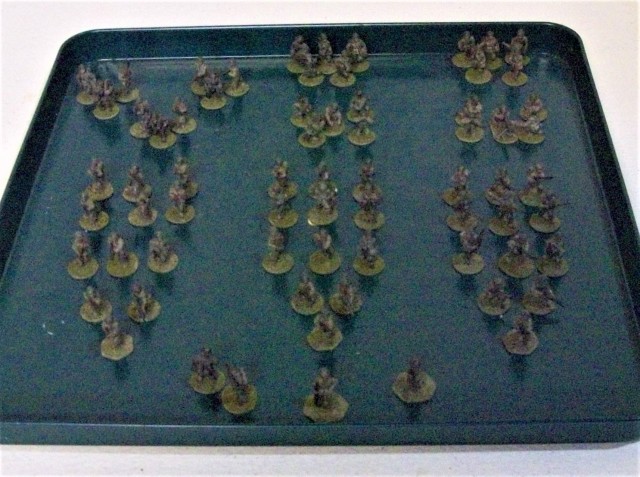 German Forces: The ad hoc platoon has been divided by the SL into two squads commanded by JLs with two 5-man LMG teams each, along with a ‘fire-brigade’ team with 8 rifles – hopefully the soggy ground will keep the Amis’ tanks away so that the panzerschreck team isn’t needed.  In support, a regular infantry squad provides another mobile force (along with -more importantly- another JL) and an adjutant (left in primer grey to indicate non-deployable status – not because I didn’t get around to painting it…no sir) allows the SL to be in the thick of things if needed.  Two minefields round out the defense – these will (hopefully) narrow the 250-meter frontage a bit, and allow the LMG’s firepower to dominate the remaining approaches. 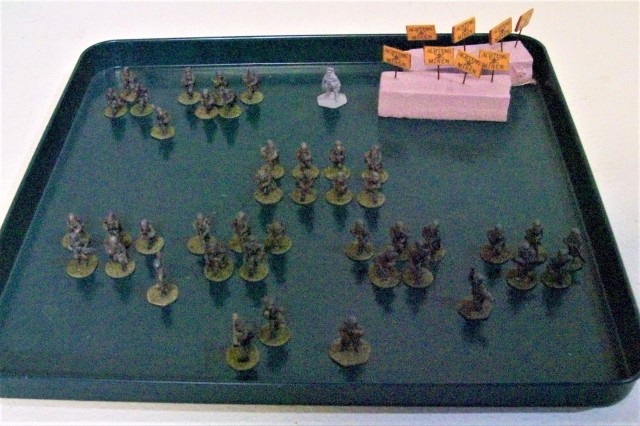 Early US deployment.  The Platoon Sgt supervises as a lot is put in place: MMG and 1st Squad BAR on overwatch, engineers to clear a path through the minefield, and 2nd Squad ready to go through the gap.  The mortar team is set up (off-camera) to the north below orchard.

Germans deploy into sunken road: The First Squad to just north of the barn (the teams will shift south to end up on either side of the barn) and the Support Squad to the bend in the south.  Visibility in the light rain only reaches to around the middle of the large plowed field / pasture in front of them (respectively), so both squads went on overwatch and waited. 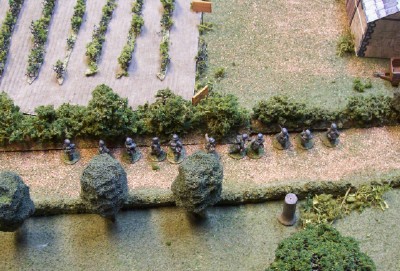 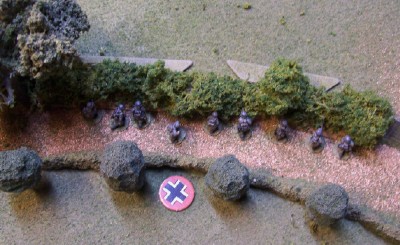 Scouts from the US 1st Squad advancing to around halfway up the field discovered the German presence by coming under fire.  One man was killed and the other broke back to his friends – US morale slipped a point.  A path cleared through the minefield allowed the 2nd Squad to move up on the north side of the field, advancing much faster than the (more cautious?) 1st Squad.  They lost one man early on from an ambush by an LMG team popping up at the SW corner of the field, but pushed on. 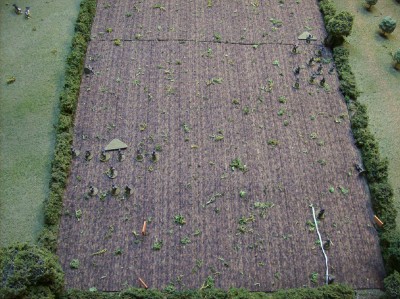 The German view of the US advance.  The Support Squad Leader has shifted his LMG team north to the other side of the gate so that they could add their fire on the advancing Americans.  The US 1st Squad is obscured by the rain, so the 2nd Squad (on the German’s left) takes some shock as they plod on.  The US mortar regularly drops rounds into the sunken road, killing one and inflicting enough shock to keep the German JLs busy. 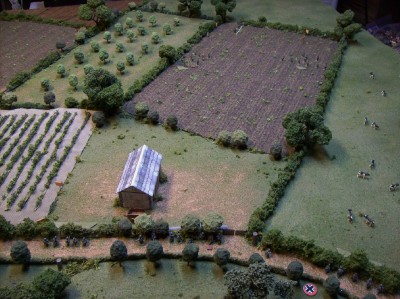 (terrain-modeling note: The two ‘stumps’ seen near the Germans -on the left behind the team and at the pasture corner near the gate- are the lower parts of larger trees.  The upper canopies have been removed for the photo and for access to the figures beneath.)

The US 1st Squad can almost make out the treeline beyond the barn when the rain suddenly becomes heavier and the visibility drops, leaving the poor 2nd Squad to suffer under the attention of two LMG teams – a man is killed, the JL is knocked out, and the shock piles on until the unit is pinned in the mud… 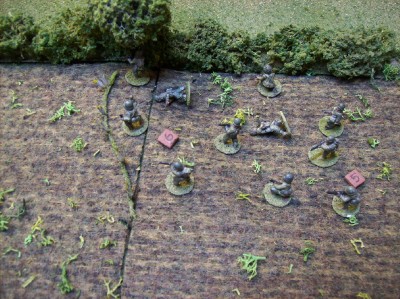 While the Germans concentrate on mauling the 2nd Squad, the US 1st Squad uses the distraction to move smartly up the field and -once in range- blaze away as they go with all guns.  This marching fire – along with a few more rounds from the mortar- kills two of the Germans, wounds the 1st Squad JL, and puts enough shock on the remainder to put them in jeopardy of being pinned.  The Support Squad JL orders his rifle team to quit watching the cows in the pasture and shift over to fill the gap in the lines… 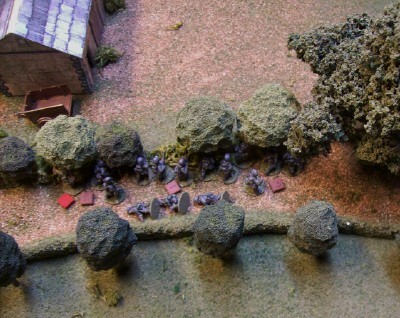 Worry over the state of his 2nd Squad causes the US Lieutenant to deploy his remaining (3rd) squad to the orchard with orders to double-time across to aid them. 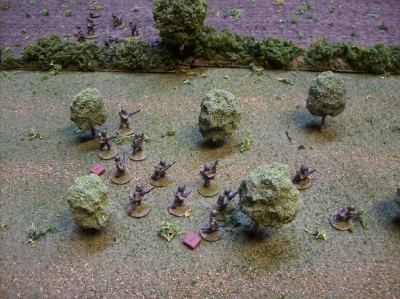 The German Unterfeldwebel -seeing the possible threat to his left flank- matches the US move by deploying his 2nd Squad from the farm’s outbuilding and having them take up position on the hedgerow next to the overgrown field north of the barn. 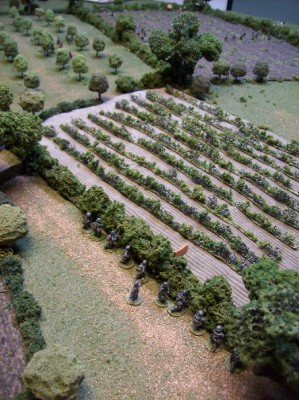 The next handful of phases sees a lot of bullets fly across and into the plowed field as the US 3rd Squad joins the others in firing on the Germans in the sunken road from its position along the hedgerow on the north side of the field .  The US 1st Squad moves up slowly but steadily (using ‘marching fire’), the mortar team plunks in a few rounds, and even the pinned 2nd Squad manages to get in a hit.  The Americans take return fire from the Germans, but luck is with them as the accumulation of casualties/shock on the Germans is greater.

The photo shows the situation just after the US 1st Squad moves up to close range.

The German support squad interrupted and fired: Three of the Americans were killed, but the JL was unscathed and directed return fire, killing the assistant gunner of the German 1st Squad LMG team (leaving the weapon manned by a single soldier) along with inflicting two more points of shock on the supporting squad’s rifle team.

The firing continues (with an interrupt by the US 1st Squad that pins the German supporting squad) and the Americans continue their luck with the dice – it seems as though the 1st Squad’s charmed life is but one bad (or even an average…) roll away from disaster but they survive.  The Germans shift the LMG team from the other side of the barn to bolster the position, but their move is too short to put them into LOS of the Americans. 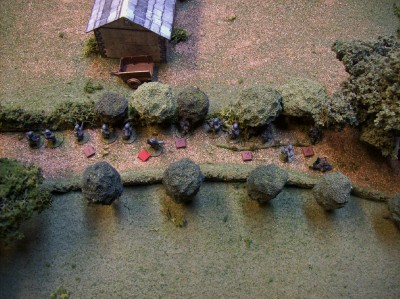 A double phase by the Americans puts enough fire into the sunken road to -in addition to killing the remaining 1st Squad LMG gunner- pile on enough shock to break the supporting squad, which retreats to within 2″ of the table edge… 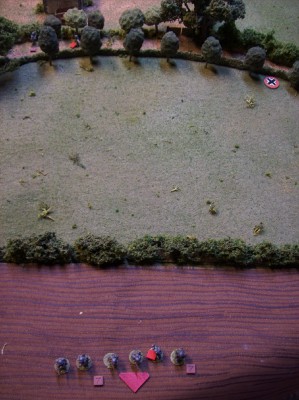 The loss of the LMG team and the breaking of the supporting squad drives the German Force Morale down to five.

The US Platoon Sergeant – perhaps hearing a cheer go up from his men as they see the Germans retreat (or more likely just gets sick of sitting at the back line not being able to see anything through the rain) – orders the engineers to move ahead up the field, tells the 30-cal team to pack up their gear and follow him, and runs through the gate and into the field towards the sound of gunfire… 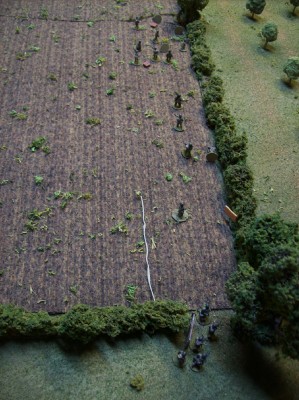 Side Note: Did anyone else wonder what the German 2nd Squad to the north was doing while their countrymen in the sunken road were involved in a heavy firefight?  My bad…

It turns out that they -and not the reduced support squad in the road- could have interrupted/fired on the US 1st Squad as they advanced to the west edge of the field.  TBH, playing both sides led me to forgetting some things/units and getting wrapped up in the immediacy of the firefight.  Oh well…

Rather than turn the clock back and replaying the missed opportunity I’ve decided to stipulate that the rain became particularly heavy in those few moments, reducing visibility to less than 75yds, and thus preventing the Germans on the north side from seeing the Americans move up – That’s my story and I’m sticking to it!  ; )

So, (now that the rain has eased up a bit…) the German 2nd Squad fires on the Americans at the edge of the field… 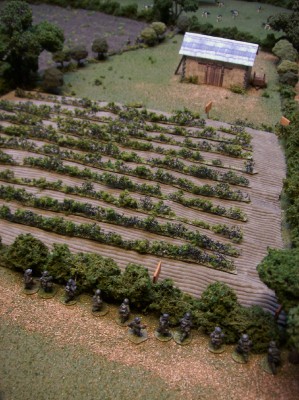 …and fires again…and again.  Three activations in as many phases by the two LMG teams pile on shock and casualties that immediately pin (and knock out the JL), and then whittle down the US 1st Squad until nothing remains but bodies in the mud – seems the squad used up all of its luck with the dice in the previous firefight.  The accumulated damage resulted in a three point loss of American Force Morale.

At the same time, the German Unterfeldwebel emerged from the stone outhouse to stop the support squad from continuing their run from the battlefield: Some stern words about duty (along with additional cajoling from the Obergefreiter) convinced them that the fight wasn’t over and that they should stick around to play their part. 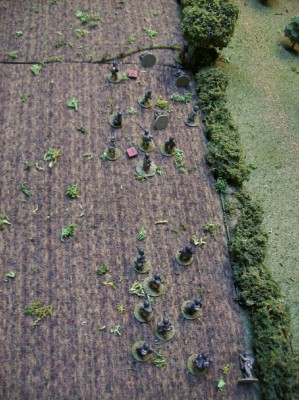 Both leaders succeeded in reducing the shock on their respective units so that when the Americans ended the turn both squads (as well as the knocked-out US squad leader) were ‘back in business’.

A picture of how things stand: 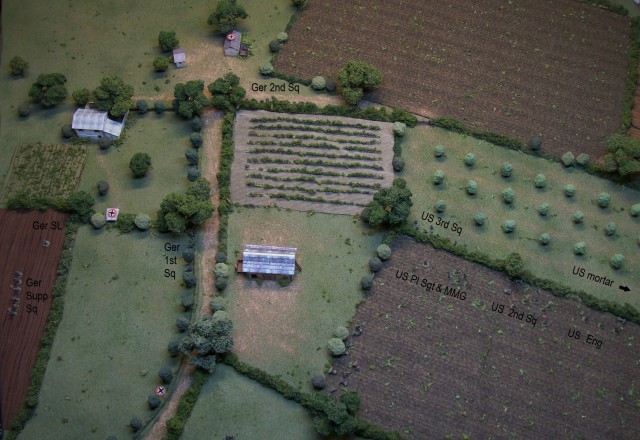 While things don’t look too bad (although far from good…) for either side, the American Force Morale of two bodes far worse for them than the one of five does for the Germans.

Just a few more phases to play out: Both sides shift forces a bit, with the German 2nd Squad moving around the corner of the hedgerow into the road on the west side of the overgrown field and the American 3rd squad takes a position behind the hedgerow on the west side of the orchard while the 30-cal MMG team moves up to the corner of the plowed field and sets up behind the scrub. 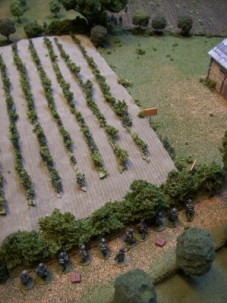 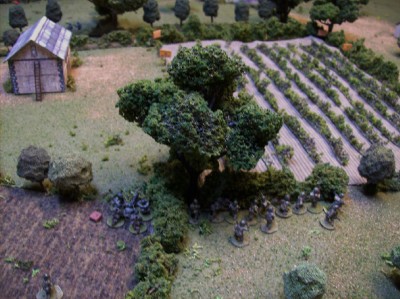 Unfortunately for the 30-cal team the scrub only gives light cover, so they present a better target.  The Germans take advantage of this and concentrate three activations of the 2nd Squad (which includes an interrupt) on firing at the MMG team.  All of the return fire by the Americans does little to hinder this, and -surprise surprise- the MMG loses a man and is pinned.  Worse for the Americans: The attached Platoon Sergeant is wounded to mark the end of the game as the US Force Morale drops to zero.

AI or not, I can’t see much to admire of my play in this game as both sides made some pretty glaring errors – the worst, of course, was the American’s failure to concentrate their attack while under-utilizing their mortar and MMG teams.  But…I got to put some toys on the table and had fun, so I’ll call it a win.